For Outstanding Leadership in Water Resources, the Award goes to Larry Martin 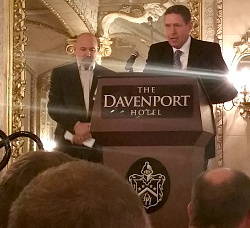 The Washington State Water Resources Association bestowed their annual Leadership Award on Halverson Northwest Law Group president, Lawrence E. Martin. Martin has been active in WSWRA for approximately ten years representing the Roza-Sunnyside Board of Joint Control. During that time he has been active on a variety of issues related to legislation at both the State and National level—including the Endangered Species Act and the Clean Water Act.

In recognition of those efforts, the 2015 Water Resources Leadership Award was given to Larry at the annual WSWRA meeting in Spokane in December. “I was honored to receive this award from WSWRA. The WSWRA does great work representing irrigation interests, which is vital to maintaining and enhancing our agricultural communities,” said Martin.